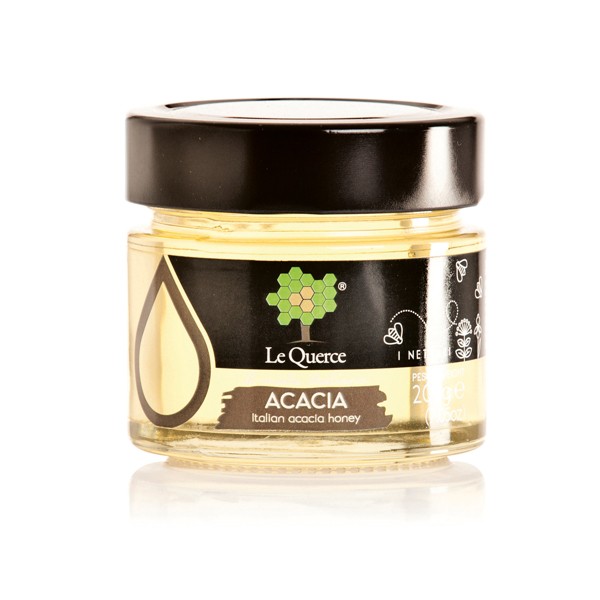 Our Acacia Honey comes from an altitudinal range between 200 and 500 m. It is harvested in conjunction with the Robinia pseudoacacia bloom. In the spring the plant’s white flowers produce a sweet aroma which attracts foraging bees to the plant.

Acacia honey - made in Italy

Origin: Italy
Harvest period: April - May
Consistency: Acacia Honey is a long-term liquid honey. Its high fructose content allows the maturation through a very slow crystallisation process. Because of its high capacity of absorbing water molecules, it is considered one of the most hygroscopic honeys and, for this reason, it is recommended that it be kept in dry storage and not exposed to direct heat sources.
Colour: Thanks to its consistency, this honey shows a bright golden shade and is almost transparent.
Taste: Acacia Honey is characterised by a sweet and delicate taste, reminiscent of sugar candies. It leaves a silky after taste of sweet almond and vanilla. This honey is suitable to sweeten food and drinks without altering their taste.

Flavour: Once opened, Acacia Honey gives a light fragrance of spring flowers. Its scent reminds beeswax and the mix of scent and taste reveals a recognizable vanilla aroma.

Acacia Honey is principally used to sweeten drinks or fruit salads. However, its delicate taste and vanilla aroma also makes it suitable to enrich pastries, bread, yoghurt, pies, fruit and vegetables.  It also can be used to add flavour to sauces. Ideal on toast and buttered bread or paired with goat, sheep and blue cheese, Acacia Honey is extremely versatile.

Acacia is a plant with arboreal appearance producing white inflorescences during spring. Each plant is made up of several small flowers, grouped in hanging bunches and diffusing a sweet scent.

Compound leaves and thorns on younger branches are two of the main aspects characterising this plant variety. Imported to Europe in 1601 by botanist Jean Robin at Henry IV’s court. This species is originally from North America, however, nowadays it is naturalized in Europe. In Italy it can be found from the plains up to an altitude of 1000 m and up to 1500 m in the south of the peninsula.